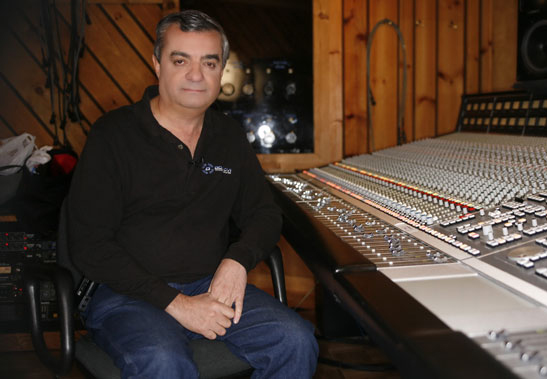 Tony Bongiovi is the world renown recording engineer and producer that was behind the mixing board for all the artists at Motown before working at the Record Plant studios in New York with Jimi Hendrix. In the 1970's he built the Power Station studio in New York where he produced The Ramones,Talking Heads, Aerosmith, Gloria Gaynor and many others. Today, he is busy with the Power Station studios in Pompano Beach, Florida and is the co-founder and managing director of Bongiovi Acoustics. Mr. Bongiovi was gracious enough to share a few thoughts with jungleroom.com...

What did you ask Berry Gordy that was intriguing enough for him to fly you to Motown?

Actually, when I called Motown I was a 17 year old from New Jersey and the call went to chief engineer Mike McLean. I came across something in their sound that was, at the time, a trade secret! It had to do with the reverb time of the echo chamber--they had a short delay time and it produced a very distinctive sound. As a result of our conversation, I was invited to Detroit where I worked at the infamous Motown Studios known as Hitsville, USA.

You must have discovered some of their secrets to grab his attention over the phone...

In general, did the musicians/staff at Motown consider Stax as a less polished contemporary or as a rival?

The musicians and studio engineers and producers that I worked with at Motown were very much interested in what Stax was doing. They looked at Stax as an equal more than rival. Stax was considered very traditional rhythm and blues. They were much more simplistic in their approach to recording whereas Motown was much more sophisticated at that time.

Was there a mutual respect between the two camps or did the Motown consider Stax inferior?

Most definitely, they respected one another.

Did you ever get to know Willie Mitchell or spend any time dissecting the recording techniques behind his releases from Hi Records?

Yes, I did work with Willie Mitchell in the early 1970s. I worked with him in NYC at Media Sound (studios). He had a rhythm and horn section down there that was very uniquely southern. The sound of the south was characterized by the way the musicians played with a more relaxed feel. Hi Records had the same background as Stax.

Are there any songs or artists from Stax or Hi Records that you wish had been run through the Motown factory?

All of them! (laughing) Otis Redding, Isaac Hayes. They had more of a grounded R & B approach whereas Motown had a more polished pop sound. I remember being in Detroit at Motown and listening to Stax. Everyone was interested in what they were doing.

Have you had the chance to investigate the new Pono music system that Neil Young is touting?

In your opinion, do you think it will be more of a subtle difference from the current formats or will it be revolutionary and become industry standard?

There is a difference but today's standard delivery systems are adequate. It's very difficult for most non-industry consumers to hear or appreciate the difference.

No. Bongiovi DPS (Digital Power Station) is real-time, remastering patented software technology. It works with the source material, remasters (not remixes) the audio and sends it back to your listening device optimized for the speaker playback system.

Was Gloria Gaynor the first artist you produced?

How did the opportunity to step up from engineer to producer come about?

While I was at Motown, I had the opportunity to listen to musicians and songwriters and I learned to understand what they did. Also, at Motown, I observed how to match a song with an artist. When I returned to NYC and was working as a studio engineer, I had the opportunity to use (the) Record Plant and Media Sound studios to and experiment. I worked with Jimi Hendix, Tony Orlando and Cy Coleman.

Do you have a musical background or were you more of a gearhead when you got into recording/producing?

I did not have a musical background and I wasn?t a gearhead either. I was a student of how to make pop records! I combined the state-of-the art studio technology that was available at the time with really good songwriters and production techniques that I learned at Motown.

Do you have an appreciation of Sun Records and did you ever get the chance to study the methods behind those sounds?

Yes I appreciated Sun Records and I did understand the methods behind the sounds. Sam Phillips took on artists who could write their own material and gave a chance to artists like Elvis and Jerry Lee Lewis. Phillips' great legacy is that he enabled artists to record and express themselves musically.

Is there a story behind meeting Jimi Hendrix--how did you find yourself working with him at such a young age?

Jimi Hendrix was a client of the Record Plant when I was working there as an engineer. I was one of the engineers that had the privilege of working with him. Jimi's work was spread out amongst 3-4 engineers and I worked with the label and production company that Jimi was signed to at the time. So it was the luck of the draw that brought us together.

Were you close with Whitney Houston?

No. I only recorded her once or twice.

Not really--only that she came in and did her job. Dionne Warwick was her aunt and Cissy Houston was her mom. Cissy did a lot of recording for jingles and background vocals at my studio in NYC Power Station. They were part of a group called The Sweet Inspirations and Cissy would bring Whitney around when she was just 9 or 10 years old, before she was an artist.

Are there any new artists that you want to work with?

Jenny Rhodes and she is a heavy rock singer.